John Henry Wilson (c1828-1905) had been a dead-end ancestor.  A Confederate veteran from Virginia, he brought his family in the 1880s to Jasper County, Missouri, where he served as a Justice of the Peace at the county courthouse in Carthage.  His son Henry Plummer “Plumb” Wilson married Ida Mae Coffer in Carthage on 28 May 1887.  This is the earliest record of the Wilson family in Jasper County that we’ve found; their origins before that date – even the name of Henry Plummer Wilson’s mother – had been lost to the generations. 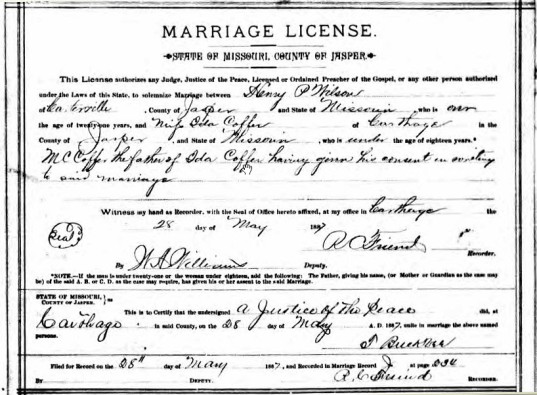 It was the discovery of another marriage record – that of the late-in-life remarriage of Henry’s younger sister Lizzie – that would ultimately lead to the final clue needed to break down the brick wall in the Wilson line, at long last uncovering the Virginia origins of the Wilson family, the identity of Henry’s mother, and her surprising family connections to several prominent figures in American history. 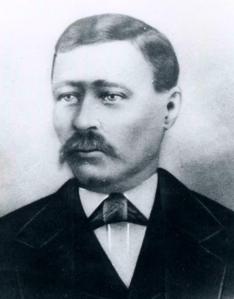 According to family recollections, Henry Wilson was a miner and a blacksmith; he had a brother named Ed and two sisters, Lizzie and Maud.  Henry died of tuberculosis during the winter of 1899-1900, prior to the federal census date.  The 1900 census of Carterville, Jasper County, Missouri shows Ida Wilson, widow, head of the household, with her five children and her widowed father-in-law John Wilson, age 77, born March 1823 in Virginia.

Henry Wilson was called “Plumb” by the family.  Even though he had died prior to the 1900 census date, the census taker visiting the Wilson home started to record his name, “Plumb,” then drew a line as if to cross it out. The remaining information on this line (relationship to head of house, race, gender, month and year of birth, age, marital status) refers to Anna, the oldest daughter of Ida and Henry “Plumb” Wilson.  Thus the enigmatic name of “Plumb” Wilson is recorded in the 1900 census, even after his death.

When John H. Wilson died on 16 September 1905 the newspaper death notices for him failed to mention the name of the wife who preceded him.  John H. Wilson and several members of his family are buried at Carterville Cemetery; but if his wife is buried there near him, there is no headstone engraved with her name and no burial record has been found. 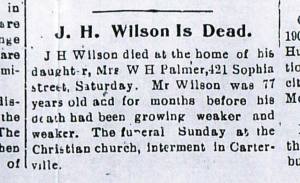 Where, in Virginia, did John Henry Wilson come from?  Who was his wife?  Where exactly did they reside before coming to Missouri in the 1880s?  With a name like John Wilson, tracing his origin would prove an uphill battle. 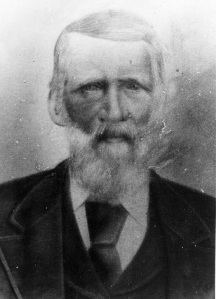 At first, we searched for clues to John Wilson’s military service hoping to identify his regiment and any information about where he came from.  Although we knew he fought for the Confederacy, his regiment was not listed beside his name in the 1890 census veterans’ schedule.  His death notices, located in three different newspapers, did not even mention his military service; nor was his regiment inscribed on his gravestone.  Decades ago, on a trip to Richmond, my cousin Harry “Bobby” Wilson tried to locate John H. Wilson’s service records at the state archives.  But with dozens of men with that name, and little additional identifying information to narrow down the field, the task was insurmountable.

Even with the existence today of all the online databases for researching Civil War veterans – notably the National Parks Service “Soldiers and Sailors Database” and more recently Fold3.com – military records for our John Henry Wilson could not be identified without more information, such as his regiment or at least his place of enlistment.

A precise place of birth for John Wilson’s children might lead to more records; not only his military records, but perhaps also his marriage record, census records, and other records preserved at the county level.  An obvious place to look for a record of his son Henry’s place of birth would be Henry’s death certificate, perhaps a newspaper death notice, or other family record made during Henry’s lifetime or shortly after his death.

When Henry Plummer Wilson died, in late 1899 or early 1900, no death certificate was created for him because the state of Missouri did not begin recording deaths – at the statewide level at least – until 1910.  Cousin Bobby spent hours at the Joplin Public Library searching for Henry Wilson’s death notice, but Joplin area newspapers are incomplete for this period, and we don’t even know precisely when Henry died.  No notice could be found.

By researching the direct Wilson line, through Henry to his parents’ origins, we had reached a dead end.

But by branching out to trace the movements of Henry’s siblings, could a death certificate for one of them be found?  And would such a record lead us to the place of origin of the Wilson family?

A death notice for John H. Wilson, published 19 September 1905 in the Jasper County Democrat, states that he died “at the home of his daughter, Mrs. W. H. Palmer, 421 Sophia Street,” in Carthage, Missouri.  The marriage of Catherine E. Wilson to W. H. Palmer, 11 March 1900, is recorded in Carthage, Jasper County, Missouri.  The 1900 census shows William H. Palmer, age 52, his wife Elizabeth, age 38 (born August 1862 in Virginia, father born in West Virginia and mother born in Virginia), and three Palmer children from a prior marriage.

By 1910 the Palmers were residing in Blackfoot, Bingham County, Idaho, where they are found in federal census records in 1910, 1920 and 1930.  William Harrison Palmer died 31 December 1935 in Blackfoot and is buried at Grove City Cemetery.

But where was Lizzie Palmer’s death certificate?

The Western States Marriage Index, provided for free by Brigham Young University, includes Idaho marriages for this period.  According to the index, Lizzie Palmer married her second husband, Joseph Hendrickson, on 23 March 1939 at Rupert, Minidoka County, Idaho.  When she died, less than a year later in 1940, her death certificate thus bore the name “Katherine Elizabeth Wilson, Palmer, Hendrickson.”  The informant, widower Joseph Hendrickson, did not know the names of Lizzie’s parents.  But he gave her date of birth, 31 August 1868, and her place of birth: Essex County, Virginia.  (She was actually born ten years earlier: further research would uncover a birth record in Essex County for “Catherine Eliz. Wilson,” daughter of John H. and Adeliza Wilson, born 31 August 1858). 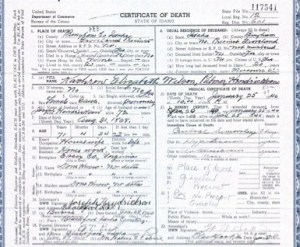 Finding Lizzie’s place of birth turned out to be the breakthrough we needed.  A search of census and vital records for this family in Essex County, Virginia, finally revealed the name of John Henry Wilson’s wife and the mother of his children: Adeliza Derieux.

A marriage record for John H. Wilson and Adeliza Derieux confirms the relationship; but this record cannot be found online.  Turning to the book, Essex County, Virginia, Marriage Records: Transcripts of Consents, Affidavits, Minister Returns, and Marriage Licenses, Vol. I, 1850-1872, by Suzanne P. Derieux and Wesley E. Pippenger, we find that Catherine Derieux applied to the Clerk of the Court of Essex County, Virginia, for a marriage license for “my daughter and ward Adeliza Derieux and Mr. John H. Wilson” on 31 January 1853.  The two were married on 1 February 1853.

Further research shows that Catherine Derieux, formerly Catherine Croxton, was the daughter of John and Milly Croxton and the widow of Peter Derieux.  Catherine, Adeliza’s mother, died about 1854.  Several of Adeliza’s siblings are found in the John H. Wilson household in 1860.

Adeliza was thus the daughter of Peter Derieux (1800-1849), whose birth is recorded in the Derieux family bible, held by the Virginia Historical Society.  Peter was the youngest son of our immigrant ancestor Justin Pierre Plumard, Comte de Rieux, of France (1756-1824). 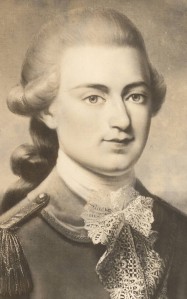 J. P. P. Derieux, as he later styled himself, married the step-daughter of Philip Mazzei, the close friend and neighbor of Thomas Jefferson who has been called “Godfather” of the Declaration of Independence.  Mazzei’s wife, Adeliza’s great-grandmother, is buried in the graveyard at Monticello.  Adeliza’s younger sister, Emma Susan Derieux, married Thomas Bolling Skipwith, Jr., a great-grandson on his father’s side of both William Skipwith of “Prestwould” and of John Wayles, father of Martha (Wayles) Jefferson and, probably, of Sally Hemmings.

The Wilson family and their children were identified in the Essex County census in 1880, 1870 and 1860.  A man by the name John Henry Wilson, with the same age and profession (attorney) as our ancestor, living eighteen miles from the county seat of Tappahannock, enlisted as Sergeant in the Ninth Virginia Cavalry.  He would soon be promoted to Lieutenant. 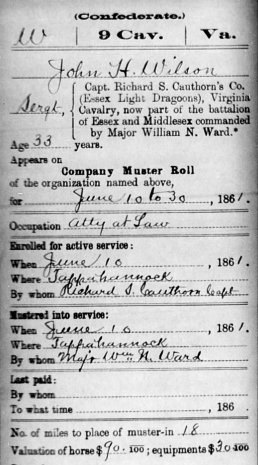 According to the book Ninth Virginia Cavalry, by Robert Krick, a member of his company described John H. Wilson as “one of the homliest” of men, with a “thin sandy beard.”  (Having seen my ancestor’s photograph, I’m satisfied this is the same man).

At last, we know something about the origin of our Wilson family and the source of Henry Plummer “Plumb” Wilson’s unusual middle name: it was the French ancestral family name, Plumard.  We still have many unanswered questions about John Henry Wilson, such as where he was born, the identity of his parents, and how he received his legal education.  We also have yet to discover when Adeliza died and where she was laid to rest.

But had it not been for internet resources – in this case specifically the Western States Marriage Index – we might never had known that Aunt Lizzie Palmer remarried shortly before her death, and that her death certificate would therefore be found in the name, Hendrickson.