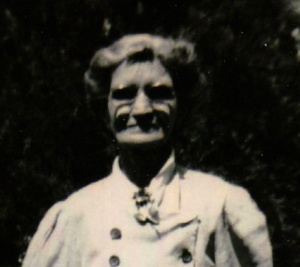 But to some more distant relations researching the Anderson family of Saginaw, Missouri, on Ancestry.com, she was the “Missing Cora.”

When Amasa Augustus Anderson (1844-1920) applied for his Civil War pension in 1898, one of the questions on the application was, “Have you any children living? If so, please state their names and the dates of their birth.”  The handwritten list he submitted contained eight names, including “Cora M. Oct. 6th 1881.”  Another document in Amasa “Gus” Anderson’s pension file, this one dated 2 April 1915, asks, “State the names and dates of birth of all your children, living or dead.”  On this form he fills in the names of all ten of his children.  Beside the name of Cora, he writes, “Living.”

A dozen or more family trees on Ancestry.com give Cora Anderson’s date of birth as her date of death as well.  Evidently, no other trace of Cora had ever been found by these Anderson family historians.  But the documents in Gus Anderson’s pension file showed that Cora was still living as late as 1915.

So, what happened to Cora Anderson?  She was born in 1881, so of course she isn’t listed with the Anderson family in the 1880 census.  The twenty-year gap in the census record (most of the 1890 census was accidentally destroyed by fire) means that by the time the 1900 census came around, Cora could have been deceased.

Or, she could have been married and listed in the census under her husband’s last name.

Database searches of marriage records for “Cora Anderson” in Newton County, Missouri, and surrounding counties in Missouri and Kansas turned up no hits.

It was the Joplin Globe, 9 October 1928, obituary for Cora’s mother, Mary Catherine (Moser) Anderson (1849-1928), that provided the missing surname: the list of survivors included “Mrs. James Craig, 1714 Ohio Avenue.”  All of the other Anderson daughters’ married names were known.  Was Mrs. James Craig our missing Cora?

A search for James Craig in the 1930 Joplin census found him living at 1714 Ohio Avenue with his wife, Cora M. Craig.  Bingo!  Mrs. James Craig’s first name was Cora.  But it would be great if we could find some documentation showing Cora Craig’s maiden name.  I checked the Missouri Digital Heritage database for her death certificate – nothing came up.

Although James H. Craig (1876-1941) is listed on Findagrave.com at the Saginaw Cemetery, there is no (as of today) photograph of his headstone.  The volunteer who created his memorial page did note that his wife was Cora Anderson Craig but did not create a separate memorial page for her.  Notably, this is the very cemetery where the parents of the mystery Cora Anderson and many of her siblings are buried.

Excellent circumstantial evidence that this is “our” Cora Anderson.  But wouldn’t it be nice if we could find a marriage record for Mr. and Mrs. James Craig, showing Cora’s maiden name?

Another search for marriages, this time giving the names of both parties, uncovered a record for a marriage between Cora Anderson and James H. Craig, taking place on 6 February 1898 in Newton County, Missouri.  The bride’s father, “A. A. Anderson,” is noted as having given his consent to the marriage as the bride was under the age of 18.

At last, everything lines up.  The marriage record shows not only that Cora Craig’s maiden name was Anderson, but that “A. A. Anderson” was her father.

Why had we found no death certificate for Cora Craig?  That one’s easy.  According to the Social Security Death Index, Cora Craig died 15 April 1971.  I hadn’t found a death certificate online because Missouri death certificates for 1971 are not available online – the Missouri Digital Heritage site currently contains death certificates 1910-1962 (as well as some earlier death and still birth records).  Her obituary in the 20 April 1971 Joplin Globe confirms that this is, indeed, our Cora, widow of James Craig who had preceded her by thirty years.

Why did searching for a marriage record for Cora Anderson (without a spouse’s name) on FamilySearch.org produce no results?  That’s a harder question to answer.  Even limiting the search to “Missouri” and a range of years from 1885-1900 didn’t get a hit for our Cora.

The lesson: If woman born in the early 1880s isn’t found in the 1900 census with her family of origin, and a marriage record cannot be found, don’t assume she died.  She could be alive and well, living with her husband (and under her husband’s name), perhaps right where you’d expect to find her.  Cora lived her entire adult life in the Saginaw area, close to her loved ones.  She’s even buried in the same cemetery as her parents and many of her siblings, right there in Saginaw.  Her mother’s obituary, with its list of surviving children, gave us the clue we needed in order to find Cora – her married surname.