By that I mean she used be in my family tree, my direct lineal ancestor.  She was my paternal grandfather’s great-grandmother.

Until, one day, she wasn’t.

For more than twenty years I’d known of Harriet, and of the Martins of Patrick County, and I’d worked at documenting their lives from a distance of both time and geography. There were, and are, many Martins in Southern Virginia, and I was bound to be related to most of them. My charts showed my father’s father, B.I. Martin, was born there in 1919, the son of two Martins – Charlie Martin and his wife Agnes (Martin) Martin, a third cousin. Charlie and Agnes’ common ancestors, Moses and Philadelphia Martin, were themselves first cousins. Moses and Philadelphia’s grandfather, Isaac Martin (1720-1774), is said to have been the less-distinguished brother of General Joseph Martin, a patriot of the Revolutionary War.

My dad, who grew up in his mother’s hometown in Missouri, never knew his father. B.I. Martin had been stationed in Japan shortly after WWII and died there in a boating accident. As an adult, with no connection to his father’s side of the family, my dad had researched the Martins at the Patrick County Historical Society and Museum in Stuart, Virginia. It was through the historical society that he contacted kin, borrowed and copied old family photographs, and located gravesites. Together we scanned and labeled Martin family photos going back four generations. I posted some of the photos to my family tree on Ancestry.com, and connected up with other distant relations.

I found a cousin online, Connie, who shared stories passed down from her mother about great-grandmother Harriet. She’d been the mother of ten children, nine of whom lived to adulthood. (Martin women, it has been said, would give birth in the morning, then go and prepare a lunch for their family at noon).

In Harriet’s later years she was stern with the little ones, maybe as stern as she looks in her photographs. As the local midwife she assisted the county doc at childbed, and she laid out the dead for burial. And when Harriet decided it was time for her to retire from midwifery, the doc retired, too.

I was fascinated by Harriet Bowling Martin’s story and by her ancestry. The Bowlings of Southern Virginia can claim descent from Major John Fairfax Bolling (1676-1729), the great-grandson of Virginia colonist John Rolfe and his wife Pocahontas, daughter of Chief Powhatan. 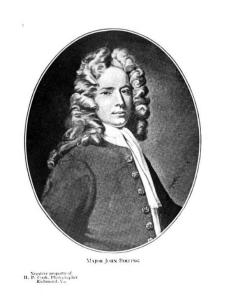 But one day in April 2012, not long after the 1940 census had been released to the public by the National Archives for researchers to access, I made an unexpected discovery. I was searching 1940s-era records in Ancestry.com, hoping to find a city directory showing the street address of my father’s mother. (The 1940 census had not yet been indexed by name, so a street address was the only way you’d find the family you were looking for). I’d found her parents in 1940, but she wasn’t living with them.

Searching under her maiden name, up popped a 1940 marriage record from the county where she’d lived. It wasn’t a city directory, like I had been looking for, so I almost skipped past it in my search results. But something told me to pull it up – I’d researched this family and this area enough to know that there was only one woman by that name in Jasper County in 1940.

So, my grandmother had gotten married on 7 December 1940, to a man named Raymond Edgington.

I did some quick mental math. My dad was born in September 1941.

We already knew grandma had married B.I. Martin about seven months after my dad was born – she’d explained that they’d had to postpone the wedding because B.I. was away in the Army.

I called the county courthouse to ask if they could check for a divorce record from 1940 or 1941, for a Mr. and Mrs. Raymond Edgington. A few hours later, I was holding a two-page fax in my hands.

It was not a divorce. It was an annulment – on the grounds that both Ray Edgington, age 20, and my grandmother, age 19, were both below the legal age to contract marriage without parental consent. My grandmother’s step-father, acting on his step-daughter’s behalf, was plaintiff. He told the judge that the young couple had never lived together as man and wife. It appears he did not know that his 19-year-old step-daughter – my grandma – was already three to four months pregnant. 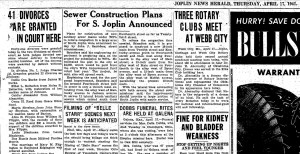 I never did see much resemblance, now that I think about it, in those old Martin family photographs.